They stay nice and soft in the refrigerator if you live somewhere warm too!

I originally made these vegan cupcakes when I couldn't find a fitting dessert for Earth Day. I wanted to take the opportunity to think about how I affect the planet and what I can do to help, like making vegan cupcakes in compostable cupcake liners.

Okay, maybe it's just another excuse to eat cupcakes.

What's the difference between a cupcake and a muffin anyway?

For me it comes down to texture: cupcakes are soft and tender while muffins have more of a structure to them. Both can be sweet, fluffy, and moist, but there's an obvious difference in texture in my book: cupcakes are pillowy while muffins are denser.

Also, cupcakes are a dessert, while muffins are appropriate for breakfast, brunch, or a snack. They can also be savory at times.

Oh, and let's not forget frosting! Cupcakes should be topped with frosting! Or at least a glaze!

Ingredients needed for these cupcakes

Here are the ingredients you will need to make these vegan banana cupcakes:

How to make Vegan Banana Cupcakes

Here is how to make the softest, fluffiest vegan banana cupcakes! There's a recipe card at the bottom of this post that has all the ingredient measurements.

What frosting goes with banana cupcakes?

They'd also be absolutely delicious with a mound of peanut butter frosting too!

If you're not a fan of frosting but you still want to make these vegan cupcakes, you could leave them plain, or add some chocolate chips or chopped walnuts! 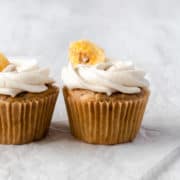 Hi, I'm Ai! I'm a recipe developer and food photographer in Canada. Welcome to my kitchen where I share delicious gluten-free and dairy-free recipes from my home!

Learn more about me →

These are the currently trending and most popular recipes on Ai Made It For You!

Here are my favorite recipes for fall! Apple pie, pumpkin bread, and even pumpkin soup.